'the Lungs' - a Sensory Interactive Experience

Class: Light as Medium of Art - Way of Seeing Now

This week, I reviewed the form of how my concept would visually be like, and potential forms of interaction the audience may experience it.

After that, I tested some technical components and explored potential equipment options that could support the such interaction.

After trying several different sketches, I decided that a more symbolic visual form may provide a more effective medium to encourage the audience to think about a bigger picture and story of negative impacts to the overall well-being of global citizens than the Amazon fire incident itself or the Brazilian community who suffered from the fire.

"Protecting the Amazon is often said to be one of the most effective ways to battle climate change. It absorbs billions of tons of carbon emissions every year." The consequence of this incident will affect climate change across the earth. To represent the fire incident itself as well as the destructive effect it has on "the lungs" of the earth, I will be making two branches of leaves which form the shape of two lungs to remind the audience of the Amazon rain forest - the lungs of the earth are in great danger.

⌘ Thoughts about the interaction:

For the interaction, I was exploring different types of sensors (photocell, potentiometer) but none quite provided the relevant interaction needed.

At the last minute, I found a "flame sensor". When the infrared diode sees the flame, it sends the digital out DO to the level of flame is represented with analog output (AO).

I've just ordered the part and will be testing to see if it works appropriately for the project. If it works as expected, this approach will require an Arduino to build the communication with light components.

- Right image: Controlling the brightness and flickering effect of the LED with a photocell sensor. However, the range is too small that the changes in the effects were a lot more difficult to see. This may be mixed using an Arduino to match the value ranges in a different scale.

Both of the above tests were done using direct power source of 5V.

Hacking into the LED light bulbs 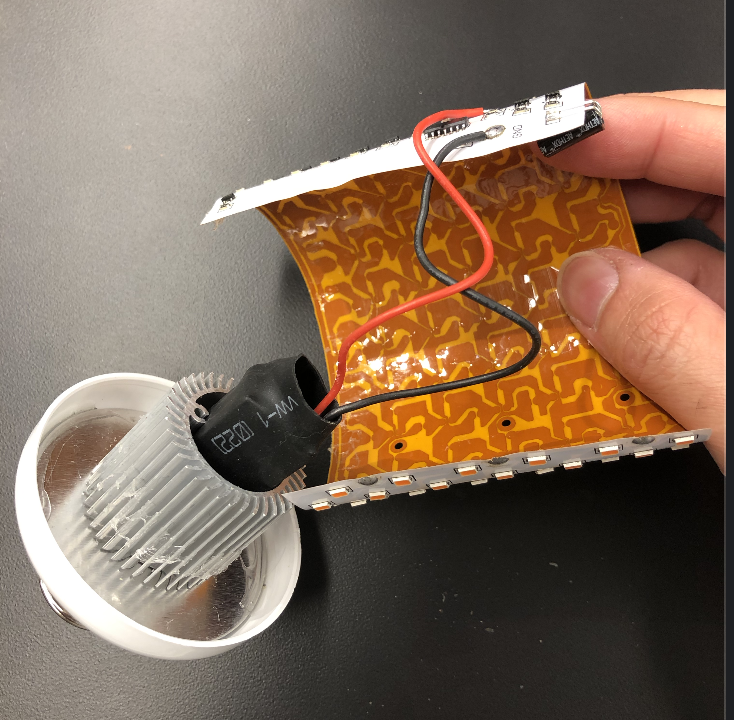 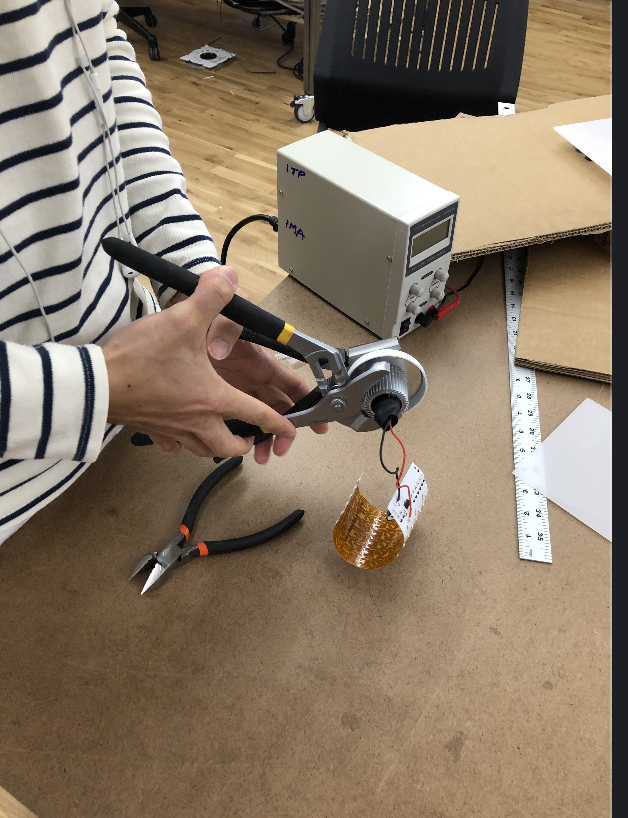 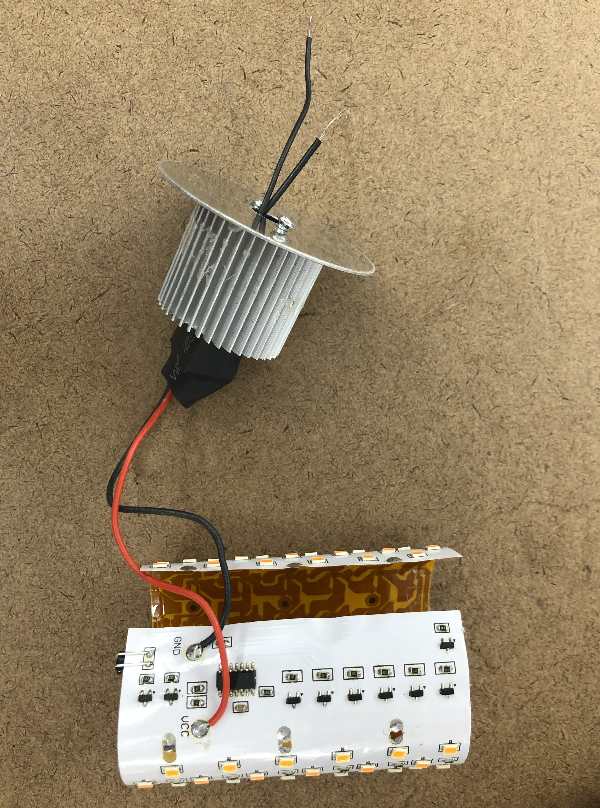 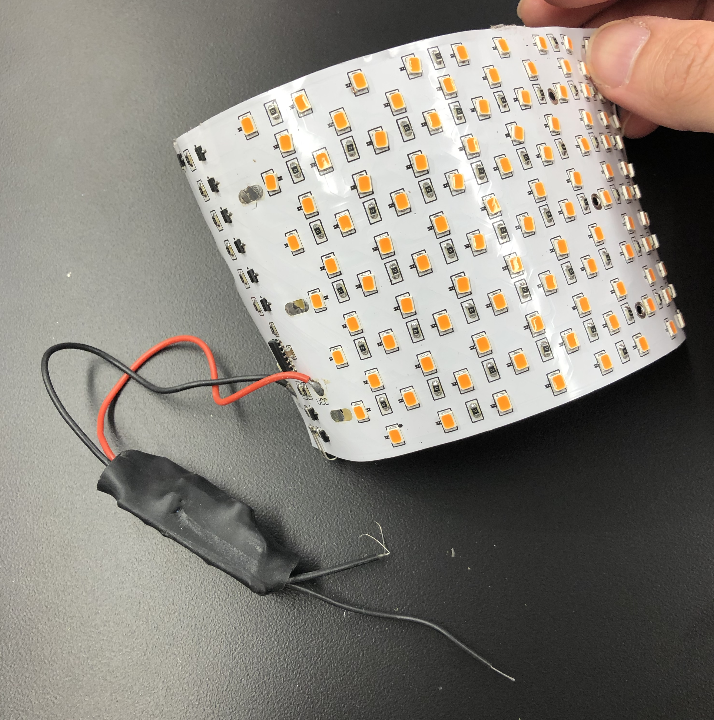 Testing the circuit on a power supply, the voltage required was at least 24V. This is a challenge because the Arduino can only supply 5-7V.

To solve this, I decided to use the original light bulb socket and find a way to convert the current between AC and DC. The solution was a relay that acts as this middleman that can also provides a connection into an Arduino. Below is the components needed and how they are connected. 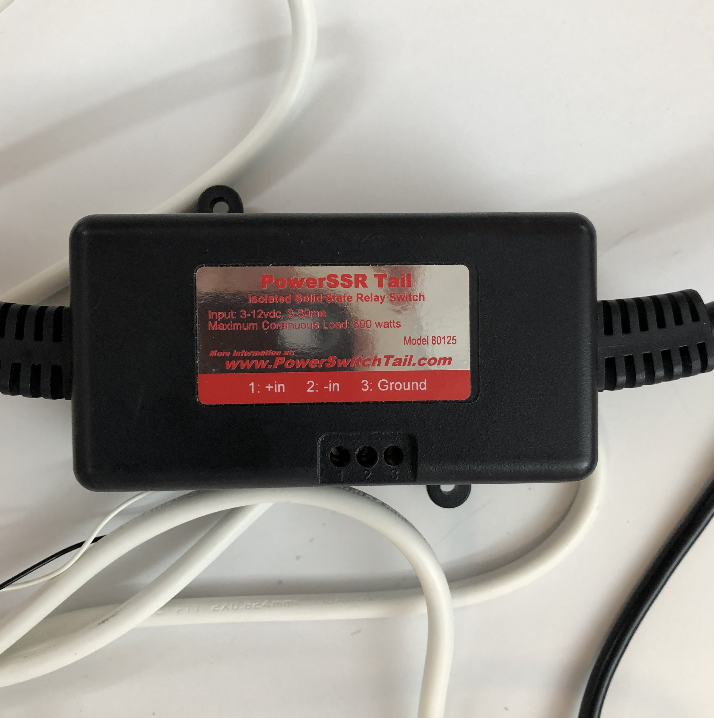 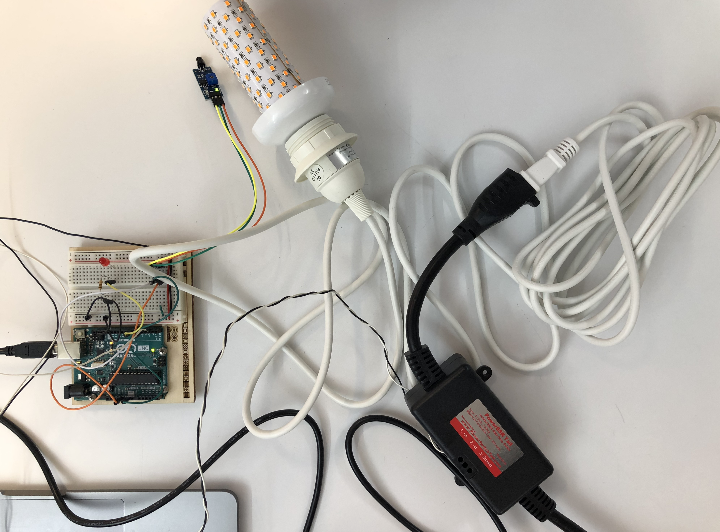 After extensive research, I found that crepe paper is the kind of material I need to fabricate the leafy lungs and provide a diffusion to the LED light bulbs.

I learned paper flower making and made my very first paper leaf. 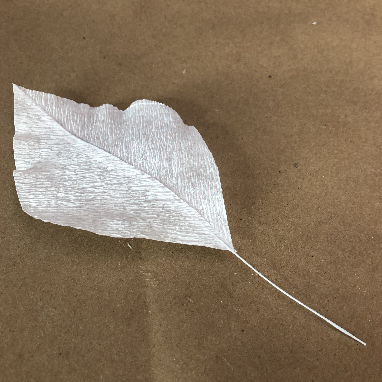 I must have ended up spending 3-4 hours making over 100 leaves and try to form the lungs out of these branches.

I used a hanger, with a wood stick and a piece of bubble wrap to assemble the spine in the middle.

On the right is the how the lungs turned out.

Wiring and connecting all components for testing onsite.

Testing sensor with all the other components while making sure all the inlets and outlets for AC, DC etc, in and out of Arduino and computer are all properly and correctly connected. 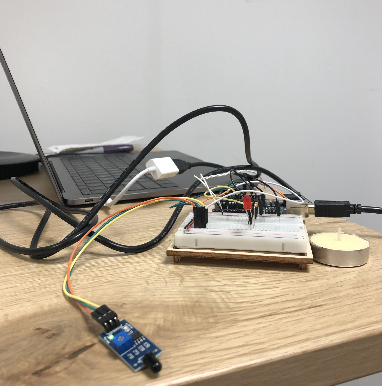 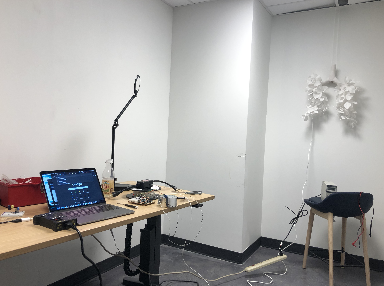 I installed the flame light bulbs and added 4 LEDs on a separate circuit to create a breathing effect in blue ambient. 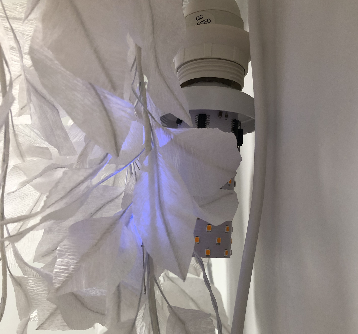 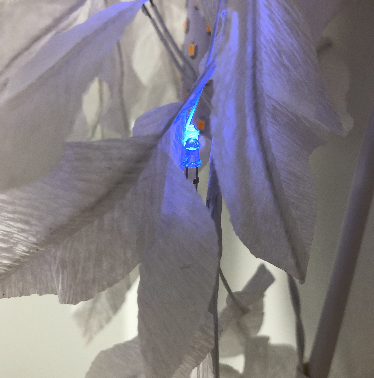 Plugging in and testing with real flame to see if the sensor would read flame light.

Finally is tidying up the wires and cables.

1. Form: There were concerns regarding: (a) the lung image possibly being too literal and more closely related to communication around lung problems caused by smoking rather than deforestation. In the end, the viewers were able to think of the leafy lungs as something more symbolic, not a direct replica of actual human lungs. The white paper material also added to the overall aesthetic of the form, (b) The other concern was how to hold and form the branches of leaves to the lung shapes with other lighting equipment on top. As a solution for this, the lighting equipment was hung on the back wall independently from the branches, which avoided weighing on the lung form.

2. Lighting effect: The leaves were effective diffusing layers in front of the flame light, hiding the LEDs while effectively illuminating the flame effect. The flame LEDs worked well with the material and the back wall, creating strong flickering effect against the wall and the surroundings. The breathing blue light effect could be improved (longer breathing delays in between instances of flashing to reflect more closely the act of breathing).

3. Experience Design: There's an opportunity to further develop this installation into a full experience design with a beginning and an end to the experience. Suggestions included: projection on a surface (ex: wall) to show caption that tells stories and/or messages around impacts on the Amazon, and the extended consequences on global citizens. The interactive element with the actual flame can also be enhanced into a representative action of burning the Amazon forest while revealing the bigger picture impact that one may not realize. However, fire control needs to be taken into consideration.

4. Sensory Experience: Feedback showed that most viewers enjoyed interacting with the actual flame and seeing the illuminated flame light as a result. A few viewers shared that they were able to "feel" the heat, or the "hear" the burning sound, or even "smell" the burned leaves. In the end, everyone had a different personal experience while viewing the installation. My hope is that, in addition to the multi-sensory experience, viewers would also become more aware and sympathy about the negative impacts of deforestation not only on the Amazon community, but on any other human on earth no mater where we are.